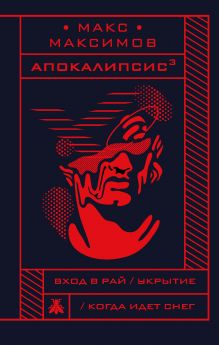 To read or not to read — this is not a question. If you are a sci-fi-minded — this is your reading.

Maxim Afanasiev (Max Maximov) was born on August 9, 1986 in Moscow. He studied in National University of Science and Technology (MISIS), but was dismissed for no show. He graduated from Moscow State University of Geodesy and Cartography, where he was involved in sports as well and got a black belt in aikido. In 2015, he created a YouTube channel called MaxMaximov. The channel currently has about 3 million subscribers and a million of daily hits. In 2016 he starts writing and his books become popular on a self-publishing platform. He is fond of playing guitar and listening to heavy music. Max Maximov is married and lives in Moscow with his wife and 2 children.

Once it was believed that the digital revolution would kill reading, but it turned out that the Internet is a huge resource for the development of literature. Max Maximov, a young author was first of all known as a video blogger, the author of the YouTube channel about puzzles and «fierce pranks». In April 2019 he published his first printed book — «Apocalypse³», and in October 2019 his second book «To the Mars!» was published.

As the title of the book clearly tells, we are going to read 3 stories of an apocalypse and its consequences: Entrance to Paradise, Shelter and Snowfall.

«Entrance to Paradise» is the story of the Judgment Day. Many religious fanatics have been screaming for centuries that a great day will come when the Lord will descend to Earth to punish sinners and reward the righteous. But what if this day really comes? What if sometime life on our home planet changes dramatically? What will people do when the countdown begins? Who deserves to go to heaven? And what will happen to those whose souls are stained?

«Entrance to Paradise» is a story about consciousness, soul and artificial intelligence. Robots have already entered our daily lives, and in a few dozen of years they will live next to us and help in our everyday life. And their algorithmic brains and confidence in their total obedience does not guarantee that a soulless machine will not become intelligent, will not begin to think independently, will not look like a person. Sometime.

Combining the theme of religion and robots gaining independent consciousness, the author presents a rather interesting and unusual result. And this is not about machines rising.

The author tells the story through of several characters who are not only completely different, but also perceive the world in different ways. They talk about the same thing in different ways, and it makes it more interesting to follow the story.

Moreover, there are two layers in the narration. The book begins in 1402, when a scientist is forced to renounce his blasphemous thoughts. And only then the reader gets acquainted with the modern world. Well, the author, turns the whole idea of the book upside down in its final lines. It’s worth while reading up to the end.

And again, mankind faces a terrible fate — a change in the Earth’s atmosphere led to an increase in the size of insects. This did not happen right away. After 10,000 years, giant insects destroyed almost all living creatures. Only about 2,000 people left living in the bunker. A group of tech scientists are trying to find a way to save the planet and return it to people. But during a mission, they make a discovery that completely changes their idea of the world.

So, the plot turns another direction, making the reader to rethink not only this story, but the whole life.

The main idea of the book is the origin of the world and its reality. How many theories of the origin of Earth life do you know? Panspermy, prebiotic soup, chemical evolution, higher powers or divine intervention, of course, Darwinism... Some of them are scientific and some are quite beyond science fiction.

The first third of the book the characters dwell upon evolution, making theories of evolutional mistakes. Then the author turns to the most incredible and hottest theories of life on the Earth — «hypothesis of simulation». Just for a second imagine yourself inside a computer code and you start shivering. But what if we are all part of a program and do not really exist?

Max skillfully wove this idea into the story. He sets the heroes a difficult task — to understand who they are, if this world is real or not, and most importantly — why we exist in this world.

The book also touches another point — the double standards of human morality.

In addition, the author returns to the origins of philosophical ideas about life and purpose of life. Almost all the dialogues of the heroes are an attempt to answer eternal questions about the power of faith and the meaning of life. Two different characters of the book exemplify those who have lost their inner core and those who have something to fight for in this life.

«Shelter» is easy and fun to read, and if you have a few free hours, be sure to read it. And believe me, this story will not leave you indifferent.

Reading this story, you unwittingly catch yourself on the thoughts of other works: Bulgakov’s «Master and Margarita», Cormac McCarthy’s «The Road», and Daniel Keyes «The Minds of Billy Milligan».

So what is this book about?

The distant future is not as beautiful as it seemed. There happened a terrible war, which changed the lives of a few survivors. The world is getting colder and to escape from the cold, the main characters start their journey to the south. But a new catastrophe awaits them on the road.

Following the characters on their journey we can imagine the world, but the world is not the plot. The plot is developing in the dialogues of the heroes. Discussions about morality and purpose of human life change each other.

The author’s post-apocalyptic world is also a scene for aliens. What happens if suoer-intelligent aliens come to Earth, where stupid people live? Will people be given another chance?

The end is not just a surprise, but a shock. The very unexpected end of the work takes the reader to a new level, making him to look at life in a different way.